The appointment of Lucas Bersamin to the SC: The why and the wherefore 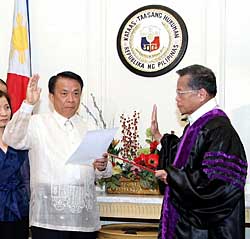 When Gloria Macapagal Arroyo became president, one of her plans was to collect judges and justices of both  the Court of Appeals and the Supreme Court like coins in her purse. Because of her evil plans and countless violations of the Constitution and human rights, she needed a subservient Supreme Court composed of justices she could manipulate like puppets on a string. And so in her over nine years in office, GMA did not appoint any member of the judiciary based on judicial philosophy and record. Most of those she appointed were people she personally knew or were endorsed to her by people in her inner circle.

Two cases in point are those of CA Justice Martin Villarama Jr. and Sandiganbayan Justice Francisco Villaruz, both of whom had no political connections. Villaruz was shortlisted for the SC six times while Villarama was shortlisted nine times. Both of them received unanimous or great majority of the votes from the 8-member Judicial and Bar Council. Both of them consistently landed as the top three choices. With regards to seniority, Villarama ranked 3rd and had 0 back log cases. There are 69 justices in the CA. Lucas Bersamin ranked only 16th in seniority. But he was first in one category, the number of back log cases which numbered over 900 cases. Lucas Bersamin was appointed to the Supreme Court in April, 2009, way ahead of both Villarama and Villaruz who were both more eminently qualified and ahead in seniority. With over 900 back log cases, it is abundantly clear that Lucas Bersamin slept on the job and failed to fulfill his duty but was rewarded with an appointment to the SC, notwithstanding.

Bersamin was backed up by SC Justice Diosdado Peralta who was appointed slightly ahead of him in January, 2009. Their friendship dates back to the 1990s. It was Bersamin who nominated Peralta and and the latter returned the favor by cheering him on, a simple case of “scratch my back and I will scratch yours”.

Now, why was Peralta’s backing considered vital? The father of Justice Peralta, Judge Elviro Peralta was a close friend of President Diosdado Macapagal. In fact, Justice Peralta was named Diosdado after the late president. Justice Peralta also loved to suck it up to GMA. He led judges seeking to be promoted to witness GMA’s inauguration in Cebu in 2004. This act is inappropriate to say the least. It is a violation of the code of conduct of the judiciary. Moreover, Peralta succeeded in getting himself into the good graces of Carlos de Leon and his wife, Erlinda Macapagal Bautista de Leon, GMA’s first cousin and confidential secretary. She was a member of the palace committee vetting nominees to the judiciary. It is also a well known fact that she brings orders from the palace to some SC justices in their homes. Again, this is a violation of the code of conduct of the judiciary.

Be that as it may, appointment by the corrupt GMA cannot be considered a badge of honor. Look back at the manicurist and gardener of GMA whom she appointed as members of the board of directors of government owned and controlled corporations. They did not even have the benefit of complete education. Look again at the controversial Udong Mahusay, the messenger who spilled the beans about the shenanigans of First Gentleman Mike Arroyo, including his relationship with his paramour, Vicky Toh. The brother of Udong who convinced him to drop the charges against Mike Arroyo was amply rewarded with an appointment as member of the board of directors of MWSS. He recieved several millions a year from allowances and over 50 kinds of bonus invented by the top officials of the MWSS.

Villarama and Villaruz were more eminently qualified and ahead in terms of seniority. Unfortunately, devoid of political connections, they were overtaken by more junior and less qualified peers. “HONOR LIES NOT IN AN APPOINTMENT TO A LOFTY POSITION BUT IN DESERVING IT”. It would have made me proud because a fellow Abreno was appointed to the SC, but with the circumstances surrounding the appointment, honestly I’m appalled. What I saw was a person discarding the rules of fair play just to get ahead of others.

Acknowlegement goes to Marites Danguilan-Vitug, author and publisher of “Shadow of Doubt” and the courageous men and women of the Philippine Daily Inquirer and the Philippine Star. The book, the editorials and columns served as the basis of the meat of this article.

Chief Architect of abrenian.com
View all posts by SysOp »
« Update: 3 Dead in a gun battle in Dolores
Security tightened in Abra town after shooting rampage »

111 thoughts on “The appointment of Lucas Bersamin to the SC: The why and the wherefore”