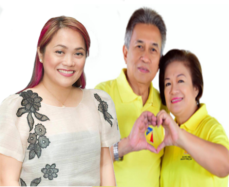 Can we have Team Asenso Love Abra?

(SAN DIEGO, CA). The “fat lady already sang”, the bar is closed and you have your last call for alcohol. You’re ready to go home , have a good night sleep and tomorrow you resume your normal life.  You think?

I’m talking about the elections of course. You think after all the winners were officially declared, all is well in Abra’s political front.

BUT right after the elections, sparks flew again between the rival Abra political clans – The Valera-Bernoses and The Bersamins.

Abra Gov. Eustaquio Bersamin  said a group affiliated with one of the winners in the May 9 elections in the province had tried to take over the capitol in Bangued town, 50 days ahead of the official inauguration of new officials.

A task force composed of policemen and Army soldiers has secured the government building following reports that supporters of Governor-elect Maria Jocelyn Valera-Bernos had tried the takeover.

Bersamin insisted it was a takeover bid. “They have to respect the fact that I remain governor until June 30,” he said. Read More

On her part, Governor-elect Maria Jocelyn Valera-Bernos on Friday (May 20) said reports that her supporters had attempted to take over the provincial Capitol ahead of July 1 were a misunderstanding.

Bernos, the outgoing Abra congresswoman, said provincial officials may have misinterpreted a call she made on May 11 to the provincial general services office to conduct an inventory of government property for which she would be taking custody.

“Before my proclamation, I was informed about people hauling out things from the Capitol [in the capital, Bangued town],” Bernos said, prompting her to ask for an equipment audit after she was proclaimed the winner of the May 9 gubernatorial contest.

“They were bringing out bags of fertilizers and water pumps which were hauled to a private compound in [the neighboring town of] Peñarubbia,” she said.

“The governor may not have known that things were being pulled out of the Capitol on May 10. I don’t know if he was told,” she said. Read more here

I understand that it was a messy (things got personal too) campaign between the two camps. BUT eventually we all have to move on.

The day after the elections, I went around Bangued and end up eating pansit in Pidigan. I am surprised how most Abrenians just started going on with their daily chores. Like nothing had happened the day before. Businesses were open, people busy doing their own thing. And of course the usually tricycle gridlock around major thoroughfares.

Some of course had a thing or two to say about the elections. Majority of the folks I spoke too are all in one in saying “We’re glad it’s over”.

Now why can’t these politicians do the same?

Chief Architect of abrenian.com
View all posts by SysOp »
« Elections 2016: Peaceful, Honest and Clean?
Elections 2016: They never supported Duterte, now they are jumping on the bandwagon like frogs »