Elections 2016: COMELEC is now in charge in Abra

As I’ve anticipated, Abra is now under COMELEC control. This happened after tensions has escalated in the past 2 weeks leading to May 9.

During the dialogue last week among candidates, concerned Abra organizations, the COMELEC and the Military, you can feel the tensions specially when some candidates were given the chance to air their issues.

Earlier that week, the COMELEC and Military also presided a Conflict Mediation and Diffusion (CMD) between San Juan Mayoralty candidates Russel Bragas and Arthur Bautista. Tensions ran high when a supporter and sister-in-law of Bragas, Mercedita Beronilla Bragas was found swimming with her own blood. She suffered four gun shot wounds at her back.

The situation is San Juan worsens as two of the Congressional candidates has some connections with the Mayoralty Candidates. Bragas is the brother-in-law of JB Bernos while Bautista is the brother of Marco Bautista.

Numerous Elections Rules violations has been going on since the start of the campaign.

We noted the massive vote buying activities on our earlier story Elections 2016: Vote Buying is out in the open in Abra, COMELEC “joking” about it

There were also reported taking down of Candidates’ posters around Abra. Congressional Candidate Dr. Joselito Bringas has filed a complain at the Bangued MPS (Municipality Police Station) regarding two unidentified person riding in tandem, taking down his posters right in front of his campaign headquarters. So far no action was taken.

Some Candidates also are not adhering to the rules and regulations regarding placements of their posters. Going around towns in Abra, we’ve seen posters everywhere including trees. The rules has explicitly mentioned that this is a violation. 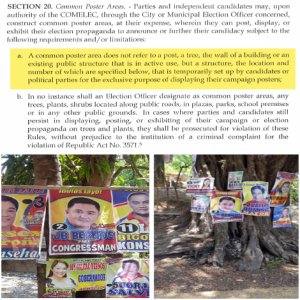 Chief Architect of abrenian.com
View all posts by SysOp »
« Elections 2016: Vote Buying is out in the open in Abra, COMELEC “joking” about it
Elections 2016: ‘End Culture Of Violence, Terror’ Abra Citizens’ Movement Urges »

7 thoughts on “Elections 2016: COMELEC is now in charge in Abra”