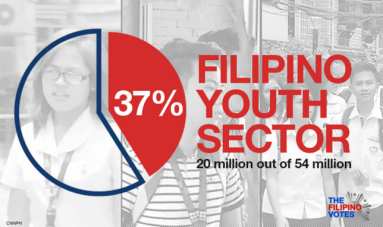 Yes, we have come to this. The time has come for the youth to take a stand. Perhaps there really is an expiry date for caring about only the “I” and “my” matters. How do I look? How do I impress my friends? What shoe color matches my blue dress?

What shade of makeup makes me look more radiant? “I” and “my” – these two are still of importance but time comes when the horizon has to expand to make way for “we” and “our”. Other things of significance start to unfold at some point. And the election period poses itself as a grand reminder. Far too many times have we worried about ourselves alone; and now the time has come to be far more concerned with the collective.

It is no secret that the youth could be a critical swing vote in the May 2016 national and local elections. According to the Commission on Elections (COMELEC), of the 54 million registered voters in the country to date, roughly 20 million belong to the youth sector.
This prompted Chairman Andres Bautista to say that the youth will likely determine the outcome of the May 2016 elections, as they also did in 2010. With the youth aged 18-35 comprising about 37% of the entire electorate, the youth sector is indeed a potent force in the Philippine elections.

In a project called #TheLeaderIWant / #AngGustoKongLiderconducted by the Divine Word College of Bangued’s Artes Liberales, individuals from all walks of life (including the youth) revealed the characteristics they look for in a leader. Among the traits that surfaced in the interviews are as follows: responsible, incorruptible, honorable, God-fearing, and transparent.

Young people also added that the leader they want is someone who works with excellence and integrity; one who has word of honor;and one who can defend the country in accordance with the rule of law.

The said project can be viewed here: https://www.youtube.com/watch?v=MSyBe-AOrsQ.

On March 16-18, 2016, a mock election was conducted at the DWCB campus where almost 400 students cast their votes for national and local positions. True enough, the very stiff rivalries of certain political figures and political clans surfaced in the mock polls.

But more than just the same old political names and faces going neck and neck against each other, this speaks of the choice of the youth in Abra. The results imply a possible scenario come the month of May and beyond. More importantly, youth participation in the pre-election period tells the public how engaged, opinionated, and active young people can be; which in turn also suggests the extent to which their role can affect the affairs of the society.

(The results of the DWCB mock polls can be accessed through these links: https://thetruthwillalwaysshine.wordpress.com

*****
As a first-time voter myself, maybe I can speak for others, too. It is not because I know all that there is to know, but because I somehow recognize the same spirit in my fellow youth.

That spirit longs for a leader who has something to offer more than just lofty goals and century old promises. This election period sends a message that the country, let alone the province, calls for a true public servant. We need a leader who does not only have competence and experience, but also possesses good character.

But if there is something that should be realized in a deeper sense, it is the fact that everyone has a part to play. We do not stop at just a wishful thinking, doing a checklist on each candidate, and making noise on social media. All of these become useless unless we actually go out and do something. With barely 40 days to go before we make our final answer, it would be best to take a closer look at each candidate. Remember that nothing beats an electorate that makes an informed choice. Intelligent votes and principled advocacies never go wrong.

That is just how it goes when the time has come, especially when the call is particularly for the youth to take a stand.

(Monique Domingo is the Editor-In-Chief of DWCB Sparks)