Election 2016: A catfight for Governorhip in Abra 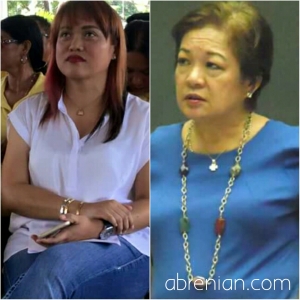 I think this is the first time in Abra Politics that we will see two main women candidates fighting it out for the Governorship in Abra.

A week before the filing of candidacy and even months away from the official campaign period, Social media was already flooded with postings of the two main candidate for Governor – Ruby Bersamin and Joy Bernos.

Ruby Bersamin, of course, is the better half of outgoing Governor Takit Bersamin. Although this is the first time she will run for any elective office, Ms. Bersamin, according to many observers, is known to be very influential in the Provincial Goverment affairs. It’s also not a secret that Ms. Bersamin is the administrator of the Abra Provincial Hospital –  which many considered as a monumental disaster.

Joy Bernos, on the other hand, is a two-term Congresswoman. I’m not privy of her accomplishments in Congress. A quick search though,  showed that Bernos was one of the Representative who revived the bill establishing the Cordillera Autonomous Region. I visited Abra 3 times in the last two years and I saw some very tiny (her name looks even bigger than the structure itself) school buildings, big tarpulines announcing her sponsorship of some concreting of roads, etc. Honestly, I saw more post on Facebook of her designer bags and trips abroad than her works in Congress.

Nevertheless, here they are…vying (or will they resort to buying?) for your votes. Both candidates has political network to run a Provincial campaign. Politics in Abra is reduced to a two main players – Bersamin vs Valera-Bernos.

But my question is, are both qualified? Do they deserve your vote? Either way it’s going to be an interesting catfight.

102 thoughts on “Election 2016: A catfight for Governorhip in Abra”