UPDATE: Ex-Abra governor gets life for 2006 murder of rival 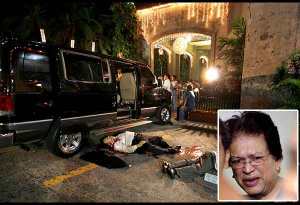 The bodies of former Abra congressman Luis Bersamin and his police escort Adelfo Ortega lie next to their vehicle after they were gunned down in front of the Mt. Carmel Church in New Manila, Quezon City on Dec. 16, 2006. Former Abra governor Vicente Valera (inset) and two others were found guilty of the murders by a Quezon City court yesterday. Walter Bollozos

By Janvic Mateo (The Philippine Star)

MANILA, Philippines – Former Abra governor Vicente Isidro Valera was sentenced yesterday to life in prison after being found guilty by a Quezon City court of masterminding the assassination of congressman Luis Bersamin outside a church in 2006.

City Prosecutor Donald Lee said a Quezon City judge convicted Valera and two others of two counts of murder and one count of frustrated murder and ordered them transferred to the New Bilibid Prison in Muntinlupa City. Valera’s co-accused are Rufino Panday and Sgt. Leo Bello.

They were also convicted of frustrated murder in connection with the injuries sustained by Bersamin’s driver, Allan Sawadan.

But the judge acquitted the three on frustrated murder in connection with the injuries sustained by a 13-year-old parking attendant, who was hit by a stray bullet during the attack.

Bersamin was gunned down in front of the Mt. Carmel church in Quezon City on Dec. 16, 2006.

Headlines ( Article MRec ), pagematch: 1, sectionmatch: 1
Valera was tagged as the mastermind in the killings by accused turned state witnesses Freddie Dupo and Sunny Taculao. The killing of Bersamin was believed to be politically motivated as he was the closest political rival of the governor.

In 2009, Quezon City judge Luisito Cortez issued the arrest warrants on Valera, Bello and aide Jerry Turqueza based on the testimony of the two state witnesses.

Tria took over the cases after they were consolidated.

Turqueza and another accused, Dominador Barbosa, remain at large.

In her ruling, Tria said it was clear that Valera, Bello and Panday were part of a conspiracy to eliminate Bersamin.

“The court finds no reason to doubt the testimonies of Dupo and Taculao. Their testimonies are credible and convincing,” read the decision.

“It must be pointed out that Dupo and Taculao were both subjected to exhaustive cross-examination by the defense. They, however, never wavered in their testimonies,” the judge said in her decision.

The judge noted that Dupo was able to establish that it was Valera who masterminded the killing of the lawmaker.

“Valera himself told Dupo that Bersamin should be killed,” Tria said.

“Valera wanted Bersamin killed because the latter reneged on their covenant that he would no longer run for another term to give way to Valera’s wife. News even circulated in Abra that Bersamin will run against Valera himself,” she pointed out.

For his defense, Valera said he would never conspire with anyone to kill the congressman as their families were very close.

He also denied knowing Taculao, or having talked with Dupo – a former vice mayor of La Paz, Abra – to plot the killing of Bersamin.

“It is well settled that denial, if unsubstantiated by clear and convincing evidence, is to be regarded as a weak defense,” she ruled.

Tria ordered the accused to jointly pay the heirs of Bersamin over P3.5 million in damages, and the heirs of Ortega over P329,000.

47 thoughts on “UPDATE: Ex-Abra governor gets life for 2006 murder of rival”