abrenian.com just got hold of the Commission on Audit (COA) Report for the Province of Abra for the year 2014.

You can download it here 01-Abra2014_Audit_Report.  You may also be interested in the Province’s 2014 Financial Statement here 02-Abra2014_FS

This was the basis of an earlier report from rappler.com COA Finds irregularities in Abra’s 22 infra projects which stirred a reaction from no less than Ms. Teresita Pajara, who I believe prepared the report. She urged everyone to read the report. So i did and am posting it here.

Ms. Pajara claimed (based on the screenshot sent to me) that the rappler.com report was in-accurate. But if you read closely the report, rappler.com merely reprinted what Ms. Pajara’s signed report (almost word by word). Below is a screenshot of her statement.

Anyway, I briefly went over the 122 page report and it seems like another repeat of previous reports – COA pointed numerous violations of law – lack of supporting documents for project, funds being used for other purposes. The list of violations go on and on. Most of management’s reply is “Sorry we made a mistake, and we’re not going to do it again” statement.

I was about to close the report but my attention got distracted with the above screenshot – Under Value for Money Audit, Item 2 stated that:

Four units of brand new dialysis machines costing P3,127,200.00 donated by the Department of Health-Center for Health Development-Cordillera Administrative Region (DOH-CHD-CAR) to the province in CY 2013 had not been used in operation  contrary to Section 2 of PD No. 1444; thereby defeating the purpose of the donation and/or resulting in wastage of government resources.

Apparently, these machines where not being used because the Abra Provincial Hospital (APH ) had no facility for the dialysis units. So where are these machines now? For 2 years, all the units were stocked at the dusty and rat infested supply room of the old APH.

P10 Million for a Dialysis Unit is a very small amount considering the reported Financial Standing of the Province . COA’s right, if you can’t use it return in. I’m sure it will save other lives…BUT not any Abrenian’s life soon.

There’s more. As you continue reading the report, it seems that donated equipment (also intended for the Dialysis Unit) in 2013 from The Abrenian Club of Ontario Canada has suffered the same fate as the dialysis machines from DOH. The below list of equipment are also left rotting in the old APH and supplies are already expired. Moreover the 3 dialysis machines and 5 treatment chairs are no where to be found. 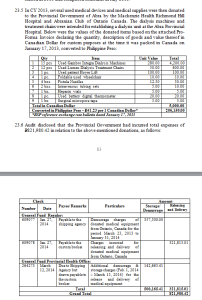 What’s really bother some in this report is the Donation was valued at P201,550.00. The Provincial Government reportedly spent P821,980.42 just to bring these donations to APH. You can read the full drama to the point of comedic story about this donation in the report. Like the DOH donation, this too has not benefited a single patient.

I wonder if the Abranian Club of Ontarion Canada is even aware if this.

This is just the tip of the iceberg. The COA report has pointed out numerous transactions at the APH and 4 disctrict hospitals, that amounted to millions of pesos, with either lack of supporting documents, missing or expired/damaged medicines and inventory manipulations.

Of course, don’t take my word for it…I urged you to read the report yourself. That if you have the patience and endurance as this report is mind buggling.

Note: If you want to read every Municipalities COA Report for 2014, You can go here 2014 COA Audit Reports for Abra Municipalities  I do challenge our users, pick a municipality and give us some highlights of these reports.