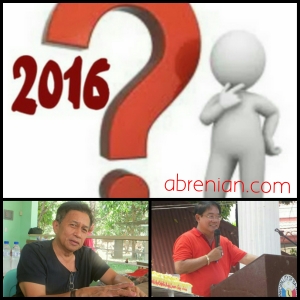 by Artemio A. Dumlao

Bangued, Abra – Abra’s political battle in 2016 has began shaping up with former allies, becoming staunch rivals, though strange bedfellows also are running under the same ticket.

Bangued mayor Dominic Valera (Liberal Party) declared during his birthday bash Saturday that he is slugging it out against incumbent Governor Eustaquio Bersamin, also an LP member.

An insider from the LP camp in Abra who preferred not to be named claimed running for Vice governor with them is Rolando Somero, Abra’s vice governor for 2011-2013 and also a former town mayor.

The shake-up in the local LP, the same insider said, was prompted by the reneged agreement between Rep. Bernos and Gov. Bersamin’s that in the 2016 polls they would switch posts but return back to their original posts in 2019. But Gov. Bersamin instead is running in 2016 against Rep. Bersamin’s father—Mayor Dominic—in the Bangued town mayoralty post.

Most likely, the same insider said, it would be a two-cornered fight.

The team-ups have reportedly been slowly cementing as Rep. Bersamin publicly accepted the “challenge” of heading Abra as governor in response to the clamor of the majority of Abrenians wanting to see her at the capitol on a daily basis.

Such tandems that have taken shape has began to answer questions how the Bernoses and Valeras, perhaps two of the most powerful political clans in Abra, face 2016 after earlier incidents involving personal marital lives and issues of two of the most important clan members that would have turned family and political relations very sour, if not bloody.

Aside from this, the tandems could spell despair and doom for the LP in Abra because the most important political leaders and 2016 all belong to it.***Artemio A. Dumlao***