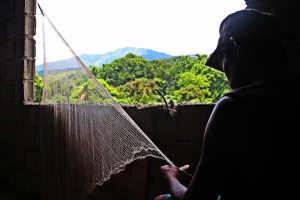 The Abra Electric Cooperative (Abreco) has just lit up sitio Vira, in barangay Alaoa, the gateway to the once-forgotten Tineg town.

Perhaps the most popular anecdotes about Tineg is its perennially highly-contested local politics.

Oftentimes bloody every local elections, Tineg is a typically poor town though mineral-rich. Its roads are unpaved, even its main artery to the province’s capital is a struggle.

With the inroad of electricity into Tineg, added Seares Jr., economic activities would propel its local economy.

Erasing poverty in the town though may take a lifetime. Maybe even more.

Even Gov. Bersamin admits he doesn’t know if how long will poverty linger in Tineg, the most infamous town of only 4,317 people (443 families) but receiving an Internal Revenue Allotment of P49 million yearly.

Tineg’s had its “second taste of national government” only in 2013 when Sec. Corazon Soliman reached out to Tineg villagers – all beneficiaries of the Pantawid Pamilyang Pilipino Program (Conditional Cash Transfer).

At least 427 families (1,884 beneficiaries) are enrolled in the CCT, the government’s primary poverty alleviation program funded through a World Bank loan.

Several years ago, Tineg “became a territory of the Phillippines again” when then Police Director General Jesus Verzosa raised the Philippine Flag in the Tingguian town.

According to the DSWD, a resolute coordination between all government agencies in the local as well as in the national government will do the trick.

Admittedly, Gov. Bersamin said, “there is not enough investment (from the government) in the highlands”.

But now with the start of electrification, naturally comes some inroads of development in the town, Seares Jr. believes.

Abreco is committed to fulfill its task and obligation to reach out even the farthest of the villages to “empower everyone”, the electric cooperative manager said. “This is our contribution to poverty alleviation.”*** (Artemio Dumlao/abrenian.com)

Chief Architect of abrenian.com
View all posts by SysOp »
« Elections 2016: Ang Da One
Abra Assassins Give Up To Police »