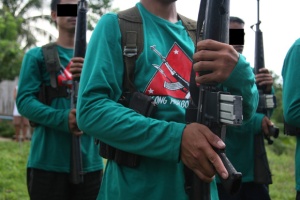 “There is a probability that rules of engagement were violated, that there could have been excessive use of force and that even if the members of the NPA had no more capacity to fight back, they were still slain or ‘no quarter’ was given during the conduct of the AFP military operations.”– Cordillera Human Rights Alliance

MANILA — Was there an encounter? Or were the seven members of the New People’s Army and two civilians captured alive then killed? These are among the questions that hound human rights defenders as they investigate the truth behind the so-called “encounter” in Lacub, Abra.

The Armed Forces of the Philippines claimed that there were two armed clashes that took place from Sept. 4 to 5. The said military operation has led to the killing of seven members of the NPAs and two civilians reportedly caught in the crossfire.

A week later, members of the 41st Infantry Battalion of the Philippine Army were recognized for their successful military operation. Gold Cross Medals were conferred to Lt. Joe Mari Landicho and Capt. Deo Martinez, head of operating troops and operations officer, respectively.

In a statement sent to the media, the Cordillera Human Rights Alliance (CHRA) said bodies of civilians and members of the NPAs who were killed “bore signs and strong indications of ‘probable torture and desecration of remains.’”

“There is a probability as well that rules of engagement were violated, that there could have been excessive use of force and that even if the members of the NPA had no more capacity to fight back, they were still slain or ‘no quarter’ was given during the conduct of the AFP military operations” said the CHRA.

“These are grave international humanitarian law violations. The 41st IB and the operating troops of the 5th Infantry Division of the AFP and the Northern Luzon Command in Abra have to be made accountable for these,” the CHRA and Selda – Northern Luzon said in a joint statement.
NPA

The human rights groups are demanding the immediate pull out of soldiers and a stop to military operations in Abra as, they said, it has resulted to widespread human rights violations in the community and breach of international humanitarian law.

Two soldiers and a civilian were killed on the second day of military operations when soldiers carrying the remains of an NPA were ambushed by rebels in Barangay Poblacion, according to a Manila Standard Today report. The soldiers were on their way to a funeral home to bring the remains of a rebel they recovered, said the report.

Human rights groups, however, said the two civilians were killed in the military operation.

Engineer Fidela Salvador, 50 and a mother of three, was among the civilians killed. Salvador was a consultant of the Cordillera Disaster Response and Development Services Inc. and the Center for Development Programs in the Cordillera.

The CHRA said she was monitoring various projects for the CorDiSRDS and the CDPC in the area. Her remains were found along with Lacub resident Noel Viste. Both were airlifted by the military to the Barbarit Lagangilang military camp.

“The autopsy report conducted by the National Bureau of Investigation cited that she suffered from nine gunshot wounds, multiple contusions and lacerations and a head injury caused by a blunt object. The report stated that the cause of her death is: “hypovolemic shock secondary to gunshot wounds and the blunt traumatic injury to the head (contributory),” the CHRA said in a statement.

The CHRA deplored the grave coercion and use of civilians as human shields and guides in the conduct of the military operations, which, they said, led to the killing of Viste.

On Sept. 5, members of the 41st Infantry Battalion, according to the CHRA’s fact finding report, coerced at least 24 civilians from Poblacion and Bakag villages to be their human shields while they were retrieving remains. The residents were forced to walk in between soldiers for nearly an hour.

Viste, however, was found dead the following day.

Another resident Nicasio Asbucan was also forced to act as a guide. On Sept. 7, he was turned over to the Lacub police. He was reportedly forced to name Jay-ar Balaoag, village chief of Lan-ag, as the one who killed Viste.

In a joint statement, the CHRA and Selda – Northern Luzon said the 41st Infantry Battalion should be held accountable for the killing of Salvador and Viste.

“Their notoriety and bloody record are more than enough reasons for them to be pulled out from Abra and the Cordillera and for them to be brought to the bar of justice, punished to the full extent of the law and not rewarded medals as the Philippine government did,” human rights groups said in a statement.

The group said that apart from the two recent reported killings, the 41st Infantry Battalion is also implicated in the massacre of Ama Licuben, Eddie and Fermin Ligiw in Baay Licuan in Abra last March.

During the budget deliberation of the Department of National Defense (DND), Gabriela Women’s Party Rep. Luzviminda Ilagan criticized the various human rights and international humanitarian violations in the military operations in Abra that led to the killing of two civilians and the suspected torture and death of seven members of the NPA.

Ilagan cited the autopsy report of Recca Noelle Monte, one of the seven members of the NPA killed in the military operations, which stated that her remains had no gunshot wound and she died of “blunt traumatic injuries, massive, head, face and chest.”

There were also hematoma and lacerations in her chest and that her left lower extremity was shattered.

Even before the “encounter” between the military and the NPAs, the CHRA said they have recorded various human rights violations in the community.

On Sept. 3, at about 8:30 a.m., Norberto Borgonia, a resident of Guinguinabang village was looking for his carabao when he was apprehended by soldiers at Mt. Kiboot. He was arrested and was forced to admit that he is a member of the NPA.

Borgonia was only released at 6:30 p.m. that day when his neighbors found him and vouched for him.

The CHRA said they have also received reports that on Sept. 5, between 9 to 10 p.m., soldiers stationed at Sitio Bantugo of Poblacion village were heard indiscriminately firing toward the direction of Talampac Proper.

As a result, three farmers who were manning the community’s irrigation system were forced to sleep in the fields for fear of being hit, six families from Sitio Pacoc evacuated and stayed at their neighbor’s houses for the night.

While the CHRA has yet to fully know what really happened during the supposed “encounters” as claimed by the military, the human rights group said the ongoing military operations in the area have resulted to various rights abuses.

“Agricultural production has been limited and small-scale mining activities have been suspended seriously affecting the livelihood and food source of the people,” the CHRA said.

Classes in three schools – the Bantugo Elementary School, Bantugo High School and Our Lady of Guadalupe High School – were suspended on Sept. 5 and 8.

Residents, for fear that they would be apprehended by the military, enforced a self-imposed curfew from 9 p.m. to 6 p.m. in the community. As a result, however, small-scale mining operations have been stopped.

Despite their demands for a military pull out, the CHRA said the AFP is even reinforcing their troops in the community.

Though there is no declaration of martial law, human rights groups believe that rampant human rights violations continue to this day through Aquino’s counterinsurgency program Oplan Bayanihan.

“We commemorate martial law declaration today as we fully condemn and seek justice for the atrocities – grave human rights and international humanitarian law violations, committed this September in Abra by the 41st Infantry Battalion … under the command responsibility of Commander-in-Chief Benigno Simeon Aquino Jr,” the CHRA and Selda – Northern Luzon said in a statement.

On Sept. 22, the country commemorated the 42nd year since the Marcos dictatorship declared martial law.

“For those of us who have suffered through the dictatorship and who remember this dark period clearly, we remember that repression was faced with organized resistance, fear was met with courage, and human dignity was reclaimed even in the darkest and most difficult times. Peace can only be built based on social justice,” the statement added.

Ilagan demanded the deferment of the budget of the DND until Defense Secretary Voltaire Gazmin submits before Congress the incident report of the 41st Infantry Battalion and for the concerned military officials to answer before the House plenary the circumstances of the operation that led to the killing of civilians and violation of the international humanitarian law.

“It is the responsibility of this House, as part of its power of the purse, to ensure that the budget of the DND will not be used to violate human rights and international humanitarian law. It is also about time that the DND and the AFP take seriously issues of human rights raised against the military establishment and not just brush them aside with sweeping denials and public avowals about a new AFP,” Ilagan said.

She also deplored the recognition given to the soldiers and officers involved in the said military operation.

“During the Arroyo administration, a butcher of a general was praised right in this supposedly august chamber and was even promoted. Now, under the Aquino administration, war criminals are awarded medals,” Ilagan said.

Army spokesperson Lt. Col. Noel Detoyato said the military operation “caused a major setback to the ranks of the NPA, and contributed immensely to the accomplishment of the AFP’s mission as embodied in the Internal Peace and Security Plan Bayanihan.”

But for Rep. Ilagan, the continuing violations of human rights and international humanitarian law hinder the peace process between the Philippine government and the National Democratic Front of the Philippines.

In a House Resolution 162, she urged the Aquino administration to pursue the resumption of the peace negotiation between the GPH and the NDF.

Ilagan said the president, as commander-in-chief of the AFP, “should be responsible for these human rights violations and extra-judicial killings committed by state security forces. Experience has shown that violence and continuing military operations will not stop insurgency. Three years of Aquino’s matuwid na daan (straight path) have not resulted in the GPH and the NDFP sitting on the table and talking peace. Aquino should immediately pull out troops in the militarized communities and focus on addressing the roots of the conflict.” (http://bulatlat.com)

Chief Architect of abrenian.com
View all posts by SysOp »
« Abra placed under state of calamity
House To Pursue Scrutiny On Abra Provincial Hospital »