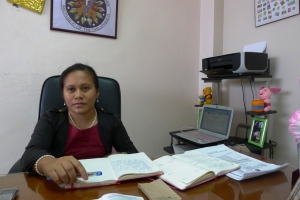 BY: MARIA TERESA B. BENAS

Bangued, Abra, (PIA) – – In continuing efforts to improve the peace and order situation in the province and towards more peaceful elections in Abra, the Church Military Police Action Group (CMPAG) recently held its regular meeting.

Belmes presented the plans of COMELEC in preparation for the 2016 national and local elections as she sought the assistance of the body in disseminating information on the continuing voters registration which started last May 6, 2014 until October 31, 2015. The poll registration also covers all unregistered qualified voters as well as registered voters whose biometrics have not yet been captured. to submit themselves for validation before their local COMELEC office in order to vote for the 2016 polls.

Belmes likewise announced that the Sangguniang Kabataan election is tentatively set on February 21, 2015. Registration for 15-17 years old youth is set on September 20 to 29, 2014 in Comelec offices.

The group agreed to again work together for more peaceful elections in Abra in the 2015 SK elections and the 2016 national and local elections.

PCI Nixon L. Laoyan, chief of the Provincial Operations and Plans Branch of the APPO, presented the updates on the status of criminality in Abra. He reported decrease in criminality in the province, and as a result of this, it has received awards.

Capt. Erwin Libnao, Civil Military Operations Officer of the 503rd Inf. Bde, also shared that the Competitiveness Local Integration Program (CLIP) for rebel returnees in the province is on-going process and that more and more of the RRs are being given their financial assistance for livelihood from concerned agencies of the government. (JDP/MTBB/Josa Mai Ramirez – PIA CAR, Abra)
– See more at: http://news.pia.gov.ph/index.php?article=111409710961#sthash.22JpNU4Y.dpuf

Chief Architect of abrenian.com
View all posts by SysOp »
« 5 NPA rebels dead in Abra clash–Army official
PHOS Is Worth More than the Obvious »