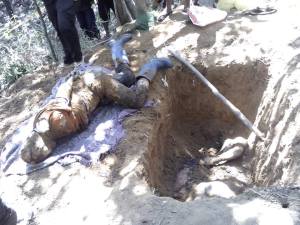 A former rebel identified as Fredie Ligiw 30 years old, together with his father Licuben Ligiw, 68 years old and brother Eddie Ligiw, 35 years old, a stakeholder in the construction of Daycare Center in So Manapnap, Barangay Binasaran, Malibcong, all residents of So. Sucao, Brgy Dominglay, Licuan-Baay, Abra were found dead on March 8, 2014, They were reported missing for almost five (5) days with hands tied at their backs and buried when they were unearthed.

MANILA, Philippines – The Philippine Army on Sunday lashed back at the Abra Human Rights Movement (AHRM) for allegedly contaminating the crime scene where a 75-year-old farmer and his two sons were summarily executed.

Captain Regie Go, civil military officer of the Army’s 41st Infantry Battalion, said “AHRM and other civilians were in a rush to unearth the suspected grave” of victims Licuben Balansi Ligiw and his sons Freddie, 24, and Eddie, 42, in a shallow grave in Sitio Sucao, Domenglay in Licuan-Baay, Abra “despite the warning of Barangay Captain Josephine Carino to wait for the arrival of Scene of the Crime Operatives (SOCO).”

“Upon suspicion, Carino forewarned the group to preserve the scene of the crime but instead, the (AHRM) represented by Miss Jonah Tinong insisted and had tampered the site and accordingly, they too burned the immediate vicinity of the grave site,” Go said.

The captain said that, “In the interest of investigation,” the scene of the crime “has to be preserved for the documentation of SOCO members.”

“If so, why (is it that) Miss Jonah Tinong insisted to unearth the grave almost defying the warning of Carino when they found the site? Why did some of militant members in the area ‘accidentally burned’ the immediate vicinity of a crime scene?” added Go.

Earlier, Tinong tagged soldiers of the 41st IB as perpetrators of the summary execution of the three men. According to Tinong, they have witnesses who saw soldiers near the grave site before the victims were declared missing.

AHRM said one of the Licuben sons was a former member of the New People’s Army and was supposed to execute a written testimony for forcing him to act as a guide for the military in the latter’s combat operations against the NPA in the province.
http://www.interaksyon.com/article/82831/army-accuses-rights-group-of-tampering-site-where-abra-farmer-2-sons-killed