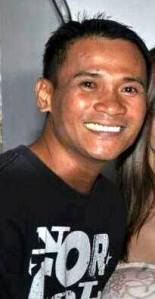 By Artemio A. Dumlao (abrenian.com)

Bangued, Abra (October 15, 2013) — A village chief of the capital town of Bangued in Abra was murdered Monday night, in yet the latest among the apparent rash of killings resuming in the province.

Raymund Bustamante Evangelista, 42, barangay chairman of Sinapangan, in Bangued was shot by his villagemate, a certain Berto Belisario at around 6:15 Monday night along Purruganan St., Zone 6, in the said town.

Bangued town police said Belisario invited the village chief to their house to chat on something that is still being probed. However, when the victim together with a certain Melchor Yves Sibayan was on their way to the suspect’s house, they were met with gunfire.

The barangay chief was immediately killed while Sibayan managed to flee unhurt.

Police said the firearm used was a caliber 45.

Sources claim that the village chief was an ally of former mayor Ryann Luna, who was ousted from his post before the May 2013 polls after a court ordered his arrest over the murder of a political bet in the 2010 polls.

Luna has fled and has not been arrested by police since then.

Less than a week before the barangay chairman’s killing Monday night, another Abrenian was murdered which was feared to have signalled the outbreak of hostilities in Abra ahead of the barangay polls.

The victim was accordingly irrigating his rice field when he met the two suspects and confronted him. The victim insisted that it was his schedule to water his rice field but the suspects got irked and shot the victim successively.

Four bullets were pumped into the farmer’s body.

Police though insists it was purely a misunderstanding over the irrigation services that prompted the shooting.

Two fired cartridges of caliber 45 were found at the site of the shooting.

A day before that, 45 year old tricycle driver Elmer Ermino Galera was killed by gunmen while unloading his passengers in barangay Sagap, Bangued.

Police have since been hunting down brothers Larry Galera, 37 and Lebert, 31, who accordingly just approached the tricycle driver and shot him in the chest and neck.