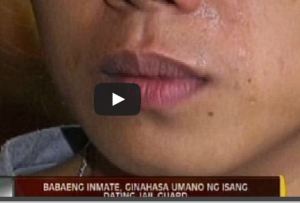 According to the report, “Precy” (not her real name) was raped inside her cell’s bathroom. She said that she could not do anything as she was easily overpowered by Bersamin.

Other inmates in the jail heard her screaming for help but could not do anything including her father who was also an inmate at the jail.

Guzman has been arrested but Bersamin is still at large.