By Maria Teresa B. Benas 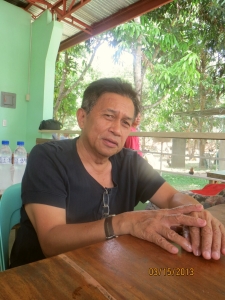 BANGUED, Abra, July 10 (PIA) — Governor Eustaquio “Takit” P. Bersamin convened a special meeting of different government agencies last week to help in the identification and implementation of priority industries that will bring “wealth and livelihood for the people at the same time preserve the cultural integrity of Abra.”

Bersamin requested everyone in the meeting to help him realize his commitment in his last term as governor saying, “While we have already put the physical infrastructures in place, it is about time we push for the industries that could provide livelihood for our people.”

He asked the agencies to give priority attention to the industries that are already existing especially those that are in line with the one-town one-product of the province – the bamboo-based industries – to sustain the identity of Abra as the “bamboo capital of Northern Luzon.”

The governor also disclosed that on his third term, he will also focus on the road concreting in the uplands so that everyone gets his share in the fruits of development in our province.

“I want to leave my legacy to our people in Abra when my term as governor ends. That I have served them well and I have done all the things that I have promised because I want to see a more progressive Abra and the people living here,” Bersamin said in closing. (JDP/MTBB- PIA CAR,Abra)
http://www.pia.gov.ph/news/index.php?article=111373249415

20 thoughts on “Guv to develop priority industries in Abra”