Dominic Valera takes over reigns in Bangued as he was proclaimed the winner. Valera defeated incumbent Ryan Luna in a hotly contested elections.

The rivalry was marred with at least 1 dead on the eve of the election day, charges and counter charges of vote-buying,  and Luna being served a warrant of arrest two weeks before the elections. Allan Seares, Valera’s runningmate also won against Eric Babida. 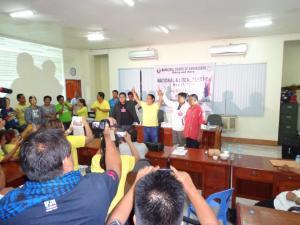 Dominic Valera proclaimed as the winner in Bangued

The Lunas avoided a total defeat (Cecy Luna lost in the gubernaturial contest and Cromwell lost in Tineg) retains their grip in the town of Lagayan . Jendricks Luna easily defeated Berna Joson.

The tandem of Jendricks and Joy Luna won in Lagayan