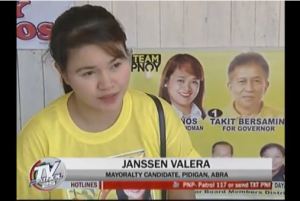 Janssen Valera, denied the allegation ssying that it was a birthday party when people went to her place. “it’s an accusation to tarnish my name”, she said.

Dominic Valera, said the same. He said that it’s a false accusation. “They are dictating the people”, he said.

Meantime, COMELEC is pursuing the case, saying that aside from the video, they got testimonies from the police collaborating the illegal act. You can view the ABS-CBN Report here Alleged ‘vote-buying’ in Abra caught on cam | ABS-CBN News.

42 thoughts on “Elections 2013: First ‘vote-buying’ Case filed against the Valeras”