There was an article we posted in February ( https://news.abrenian.com/2013/02/28/comelec-signs-moa-with-abra-concerned-groups-for-peaceful-orderly-polls/). In this story, a memorandum of agreement (MOA) with CCAGG, the COMELEC and Transparency and Accountability Network (TAN) to pilot the project in Penarrubia, Abra.

“What we want to do in Penarrubia is set the elections right, to see if we can make elections work for the people, for the benefit of the people, to empower the voters to be able to choose leaders who will be responsive to their needs,” Lazatin said.

Through the MOA “the Comelec will assist us in monitoring the elections to make sure that there is no vote buying [and] that campaign finance laws are adhered to [by candidates],” he said.

The launch was widely accepted by Abrenians. Unfortunately, the Local official of Penarrubia rejected the project(https://news.abrenian.com/2013/04/01/abra-town-rejects-social-experiment-project/) saying it reflects badly on their town.

The Sangguniang Bayan of Peñarrubia has argued that it “would bring unwanted negative attention” to the town.

Town Mayor Geraldine Balbuena also questions the choice of Peñarrubia as the venue for the experiment considering, she says, that there are municipalities with worse records in terms of violence. The provincial capital of Bangued, for one, is more notorious when it comes to killings, she points out.

“Why did they choose our town (to pilot a project to restore integrity) when it doesn’t have the worst reputation,) she asked in the vernacular during a phone interview.

Proponents of the pilot project entitled “Restoring Electoral Integrity in Penarrubia, Abra” attending the first ever Peoples’ Meeting de Avance in the province. (From left to right: Prof. Cristy Rodriguez of DLSU Robredo Institute of Governance, Vincent Lazatin of Transparency and Accountability Network, and Dean Edna Co of UP – NCPAG.)

And I thought that was the end of it until one of the project proponent Paula Bianca Lapuz (https://www.facebook.com/pblapuz) reached out to abrenian.com for help.

In her email, Lapuz informed as the the electoral reform project in Peñarrubia, Abra is moving along. Lapuz is really counting the support of whoever is elected later on because part of the plan is to have post – elections engagement with the government.

She outlined what is needed. It’s quite simple of you think about it: The initiative seeks to empower citizens so that they can participate meaningfully in various electoral and political processes and activities. Our criteria for choosing the pilot location are as follows: 1) ease of accessibility; 2)small voting population (2,000-3,000); 3) relatively low security threat; and 4) the willingness of the candidates to participate in the project.

Now the big question is Why would the local government refuse to support this project? We hear from every single politicians that they support Clean and Honest Elections and yet, when such a chance occurs, they turn around and wash their hands?

Abrenians (including myself) are indisgust on what’s happening in the past few days. I don’t have to elaborate, just read our articles and comments and it all speak for itself. This conduct of the 2013 Elections has gone from bad to worst. At this point, Abrenians are in doublt if we ever achieve a peaceful elections.

Anyway, the very first Candidates’ Engagement session in Penarrubia, Abra was conducted yesterday.Proponent of the project were in attendance including the DLSU Robredo Institute of Governance, Transparency and Accountability Network, and the of UP – NCPAG. 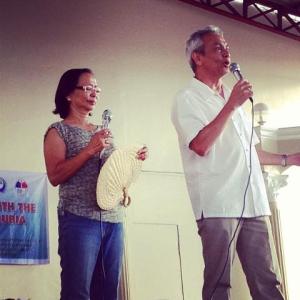 The event was hosted by artist Jim Paredes and a representative from CCAGG. We hope to get some reports from the project representative.

abrenian.com believes in this project. This is a good step moving forward for Abra to finally takes off the shackles of Electoral mediocrity. I encourage everyone to support this project as well.

The project only reached out to just one Town, but with all your support, we can have this project continue until the next elections in 2016.

One way to do that  is to go to their FaceBook page and show your support  https://www.facebook.com/RestoringElectoralIntegrityInAbra or go to their website for the full description of the project Restoring Electoral Integrity in Abra.