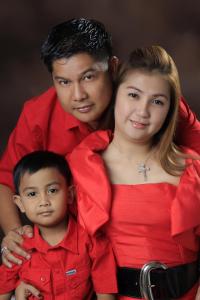 The First Family of Bangued

Bangued, Abra. I finished up my interview with Former Congresswoman Cesy LUna. She said goodbye to us and left for the night.

I went back to our table and took a quick gulp of my beer. I followed it up with a spoonfull of kilawen. Mayor Ryan Luna was standing at the edge of the porch outside his hotel. He was drinking soda (sofdrinks). He doesn’t drink beer, one of his aide told me. “uray no makipinuyat, haan nga uminum ti beer ni Boss”.

He was staring blankly at the image of a calm Bangued. Who knows what he was thinking at this point. Perhaps the coming elections.

I approched him and tap him lightly in the shoulder. He turned around and I smiled and asked “Kumustan Mayor?”. He sheepishly replied “Kastoy latta sir, imbag man ta nakaawid kan”. He still calls me “Sir”, maybe out of respect, but I figured it was more of our history together. The mayor was my student when he was in 2nd year high school in DWCB. I briefly teached computer classes at DWCB, until I got summoned to a lucrative job in Manila.

He is popularly called “Negro” which he really don’t mind. In fact he liked being called that name. Perhaps a unique way of people remembering him.

But I remember him more of a very quiet boy in high school, Who at that time was tasked to train fighting cocks. I would tease him during my class when he failed to do his homework. “Nya Ryan, busy ka man ngatan nga ag-tre-training dagiti manok mun nya?”.

I can not believe that the first time I’m going to meet him after so many years, he would be standing before me as the Mayor of Bangued.

SysOp: Mayor, how is it going so far with your work as a Mayor?

RL: Ok met sir. It has been an eye opening serving the people of Bangued. Addu ti naadal ko. I learned how to mellow down. “Mabalin met gayam ti agturay nga naanos nong”. Aglalo idtoy Bangued, everyone is looking at you. I’ve been trying to cleanup the image of the office of the Mayor. Issu nga no adda manggeg ko nga agabuso and use my name, I make sure na I deal with it. Naminsan pinag-sa-sawan dak pay idta kapitolyo ngem I became the bigger man and walk away.

SysOp: Mayor, it’s my first time in 12 years to come home. I noticed the the town is booming with businesses. But I see chaos in the streets. Tricycles are everywhere. What’s your plan about this?

SysOp: I spoke to Mrs. Dacanay, our DWCB principal. One thing she’s very concerned is the proliferation of Internet Cafe’s in Bangued. It seems that alot of students prefer to go to these places and not go to school. What do you think your office can do?

RL: Ammok sir detta nga problem. I will make sure to talk to all the schools and our office is willing to help in implementing a plan to keep our students in school. I will personally meet with Ma’am Dacanay.

SysOp: Speaking of which, It’s a return bout between you and Former Mayor Dominic Valera, what’s your chances in the upcoming elections?

RL: I won the elections in 2010 convincingly against tito Dominic (the Mayor and Valera are relatives). Mariknak nga addu met ti mayat ti innar-aramid ko as Mayor. So I am very confident that I will get their support. I have the support of the youth. Ngem uray met dagiti nataengan ket kunanada met nga mayat ti pang-papalakad ko ditoy munisipyo.

SysOp: What are your worries in this election?

SysOp: If you win, what’s your priority programs?

RL: Kas kunak sir. Adda planokun about the traffic situation and the congestions in Bangued. Ngem kayat ko nga kapateng (consultations) ammin nga ma-apektuhan deytoy nga planok tapno ammin ket ma-benepisyoan. I want to serve Bangued with a different mind-set. I proved it for the past 3 years. I want to continue what I have starter.

Mayor Luna ended our talk by again stessing the importance of young generations to take over old politics. He kept repeating his vision that Bangued needs new ideas and this is only achievable with young minds at the helm. (abrenian.com)

39 thoughts on “Elections 2013: Interview with Mayor Ryan Luna of Bangued”