ABRECO polls a prelude to 2013 polls in Abra 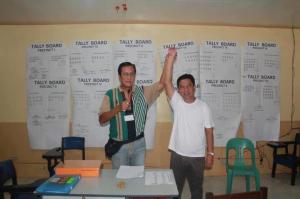 La Trinidad, Benguet – Elections at the Abra Electric Cooperative (Abreco), which turned unruly over the weekend, is seen to be a prelude to the upcoming 2013 polls.

“It was highly politicized,” admitted Cordillera police director Chief Supt. Benjamin Magalong, who also hinted he himself was astonished.

Last Saturday’s election for the one-seat district election for Bangued of the cooperative was reportedly marred with even key political figures influencing the results.

Harassments around the polling area inside the Abreco compound were apparent as partisan political figures were physically present influencing voters, the police said.

“Di naman ganun,” retorted Bangued Mayor Ryann Luna, whose father—Roger—ran versus former Bangued Mayor Ramon Puruganan in the controversial polls. It is not us who were harassing, he insisted, while claiming victory during the cooperative’s election.

But Puruganan is protesting claiming a failure of elections must be have been declared.

Abreco general manager Loreto Seares Jr. was also was caught aghast with the turn of events and why it has to turn that way.

“All we wanted to have is a clean and honest election to fill up the vacancy of the district board so that consumer-members (Bangued district) will have a voice in the 9-member policy making body of the cooperative.”

Presence of peacekeepers was requested to maintain order and the police did what they have to do to thwart the situation which could have led to a more serious situation, said Seares Jr.

With the events, both Seares Jr. and Chief Supt. Magalong takes it as “a learning process”.

Seares Jr.’s only wish was that with Saturday’s “learning”, the consumer-members of Abreco “embrace the spirit of democracy and during such kinds of activities to always exercise their rights.”

While Magalong said, “now we know who is deceiving, who is who,” as the police official claim, they will be circumspect on the next polls with how to deal with situations like these including the 2013 polls.

But even with it, general manager Seares Jr. said, Abreco will rise up to the challenge of further giving selfless service to the consumer-members and the people of Abra.

The Cordillera police, which has been monitoring Abra’s situation ahead of the elections, according to Magalong, “will make the necessary adjustments on how to handle the situation in the 2013 elections.”

Saturday’s “unruly” elections at Abreco was perhaps the first of its kind in the 40-year history of the cooperative. -Artemio Dumlao
http://www.philstar.com/nation/article.aspx?articleid=850259
Related Story: ABRECO Elections…NOT!